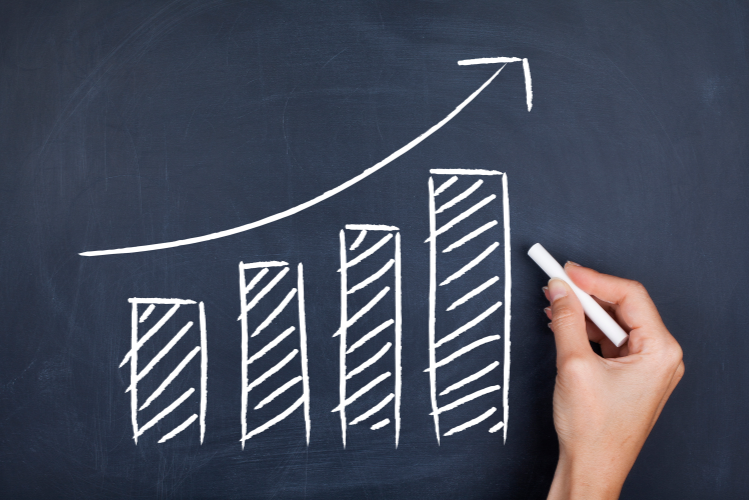 In mid-December, the Center for the Advancement of Teaching fielded two large surveys of all students and faculty on the Reynolda Campus. Both groups were eager to share their experiences. We received responses from 1,832 students and 473 faculty, constituting response rates of 26.4% and 63.4% respectively. Over the next several weeks, we will report the results and discuss what we’ve learned in a series of blog posts. We begin by highlighting key results from the student survey that are likely to be instructive to those preparing their syllabi for the spring.

As expected, students expressed a preference for in-person learning. Students were more likely to report engagement in their in-person courses, the highest-rated pedagogical strategies in blended courses were all of the in-person options, and a number of students made their preference explicit in the open-ended comments. Nevertheless, a sizeable majority (63.5%) of respondents taking online courses reported they were engaged in those courses (Figure 1), and 35% of respondents were so pleased with their blended courses that they reported they would like to continue taking them in the future (Figure 2).

To be sure, engagement is not the only (or perhaps even primary) goal of our courses, but to the extent that we do want our students engaged, these results are worth noting. They suggest that our efforts to engage our online and blended students have been largely successful. But they also suggest that some of our students would benefit if we could create more opportunities for them to connect with us and one another in a safe, socially-distanced way.

While we cannot wave a magic wand to remove the risk of COVID or increase the number and size of our spaces, a few small changes might make a difference. Those teaching blended courses could make sure to maximize their use of in-person class time; those teaching fully online courses could create structured opportunities for on-campus students to meet with one another outside of class; and we could consider offering mask-to-mask office hours if and when we are able.

We asked all students who responded to the survey to tell us about an online assignment or activity that helped them learn this semester. 434 students were willing to share. Many commonly cited activities (office hours, practice problems, etc.) were mentioned by 10-20 students each. But two specific experiences were mentioned again and again. The second-most appreciated activity, cited by 85 different students, was engaging with pre-recorded lectures.

I benefitted the most from pre-recorded lectures. I could pause them, repeat them, and watch them on my own time. If I misunderstood something, it was easy to go back and listen to the lecture again.

This finding is consistent with two further results from our survey. Of all the learning activities we asked about, online students were most likely to report engagement with recorded lectures that were shorter than 15 minutes (Figure 3). Moreover, when we gave students a list of instructional technologies and asked them which they would like their instructors to continue using post-pandemic, recorded lectures came out on top with 48.4% of students wanting this practice to continue (Figure 2). 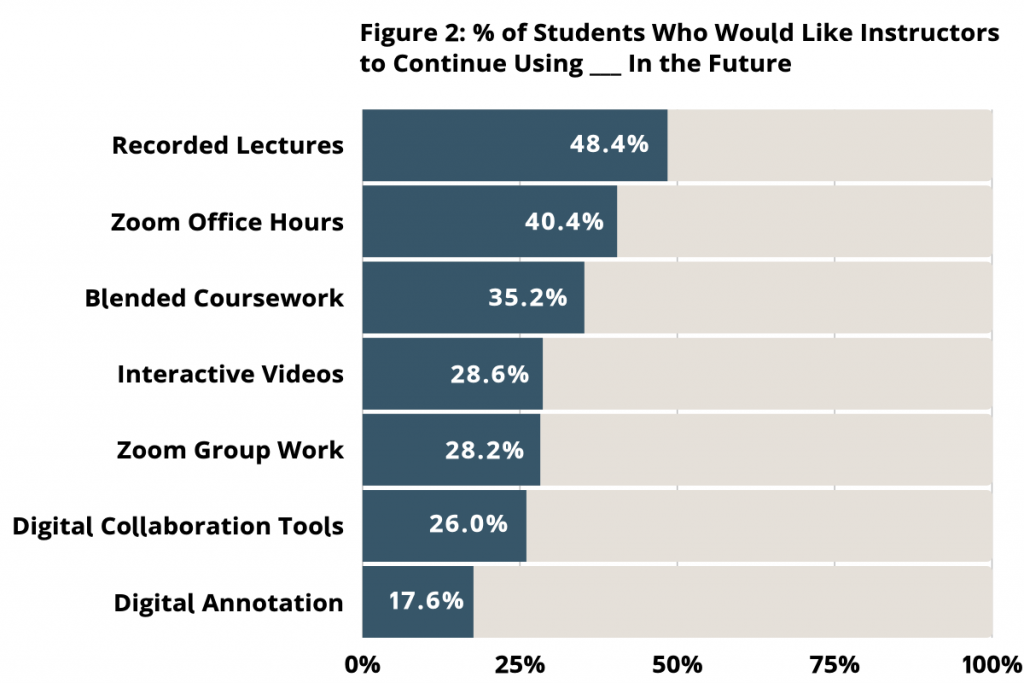 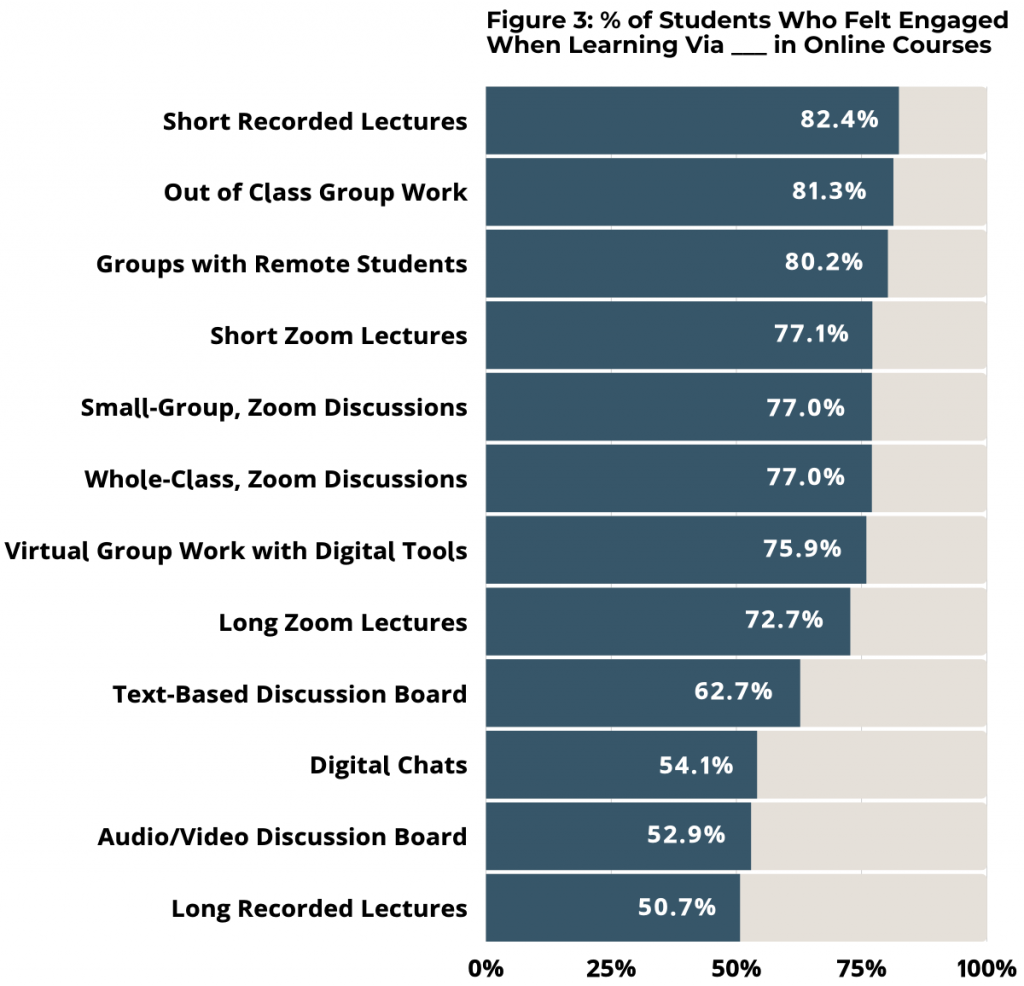 These results are consistent with the research on student learning and suggest that those who hope to lecture should consider shortening their lectures and pre-recording them for students to watch on their own time. If that is not feasible, short live lectures are your next best bet, followed by long live lectures. Long, pre-recorded lectures should be avoided if at all possible.

Part of the reason students appreciated pre-recorded lectures was that it freed up class time to engage with their instructors and their peers. While 85 students identified pre-recorded lectures as a beneficial activity, students were most likely to express appreciation for collaborative learning activities. 126 students–close to 30% of all open-ended respondents–described an assignment that required them to work with others. Respondents often identified a dual benefit. In addition to helping them learn challenging material, these activities were sometimes the only way they could build new social connections on campus this semester.

Having a consistent group of people to help you with challenges and to learn from was greatly beneficial. I found that I bonded with my group and have new friendships because of it. 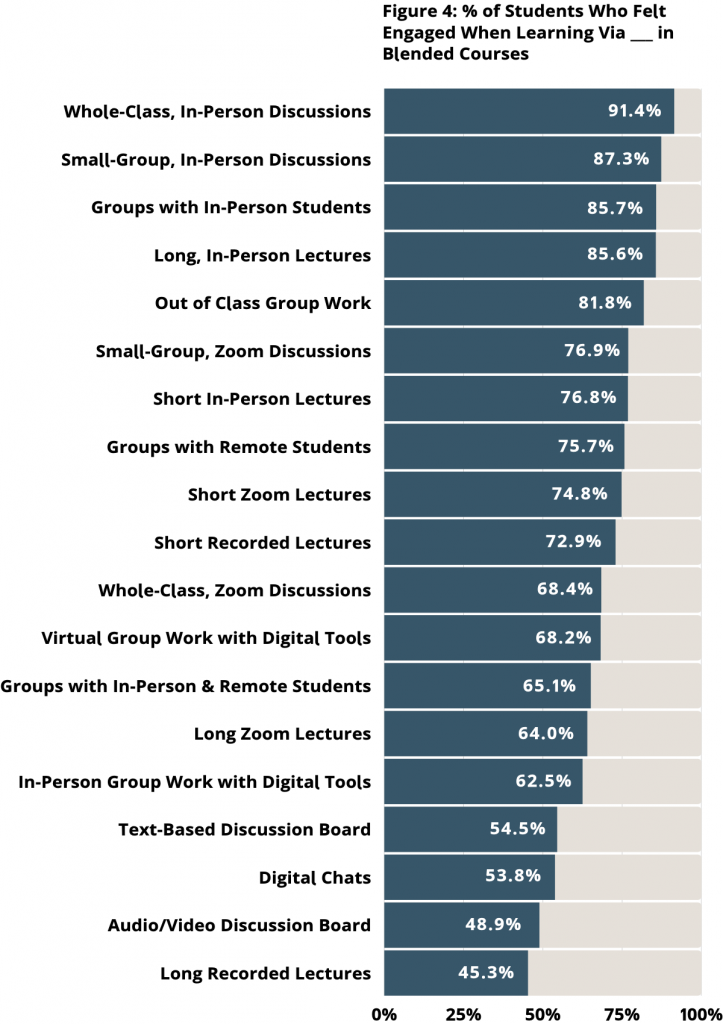 Discussion boards were equally polarizing. The quantitative data suggest students were least likely to be engaged with this form of discussion, and a few students did in fact describe them as useless “busy work” in their comments. Yet those who were engaged with discussion boards liked them a lot. They were singled out again and again (32 times, to be exact) as a beneficial learning activity. One student noted that they experienced discussion boards in both ways and helpfully suggested that strict, graded requirements for posts can stifle authentic, generative discussion.

I had online discussion board requirements in all three courses but I felt it was only effective for one course where the professor truly fostered discussion (rather than provide strict instructions and require us to touch on so many points from the articles).

These results suggest that students would benefit if they were given more opportunities to engage with one another. This could include small-group work during synchronous class sessions, or larger group projects outside of class time. Yet they also suggest that no single activity will make every student happy and that how a strategy is implemented can be just as important as the strategy itself. If you’ve tried an activity that doesn’t seem to be working, we encourage you to reach out to us before scrapping it entirely. Sometimes a few small changes can go a long way!

While this post introduced you to some important results, we have much more to share in the coming days. What we’ve learned about workload, assessment, and student well-being are especially relevant but complex enough to warrant their own posts. We’ll also be sharing more about accommodating students in isolation and quarantine, Zoom-fatigue, and academic integrity. Stay tuned!

Center for the Advancement of Teaching

The Center for the Advancement of Teaching aims to advance passionate, reflective, and evidence-informed teaching. We contribute to Wake Forest’s distinctive mission by encouraging the development of teacher-student relationships that prepare all students to live examined, purposeful lives. Learn More >>

Find us on campus map